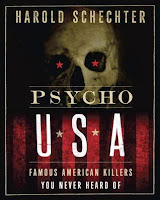 Psycho USA by Harold Schechter is a non-fiction true crime ebook that I received through NetGalley.  In this book, Schechter has compiled short but gruesome accounts of several of the most shocking murderers in United States history.  These men and women were, in their respective times, considered to be the perpetrators of Crimes of the Century - the most vile and atrocious fiends this country had ever seen.  But they have since faded into obscurity.

Now, however, Schechter has brought them back.  Psycho USA is separated into seven sections, each representing different eras, and each chapter within those sections is devoted to one killer.  Section I, for example, covers the period from 1782-1826, and the last section covers from 1941-1961.  Within many of the chapters are also some side-note boxes, covering points of interest that are mentioned in the main text, such as murder ballads or a discussion on the history and/or psychology behind a particular style of murder.  I found these very interesting, and although I call them "side notes," they're really more like mini-chapters in some cases, since they're more than just little blurbs.  They're just not always specifically about the person who was discussed in that chapter.

Schechter also includes a fair few photos and a lot of quotes from the killers' confessions.  Some of these people just look so "normal," that it really makes me think more about how you really can never tell with anyone how flipping crazy they might be just from looking at them.  Reading the words of some of them, however, it kind of slaps you in the face with how obviously unbalanced they were, and you have to wonder how in the world the people who knew them didn't realize this before the person finally got found out and convicted.
For real, though, Psycho USA is a great read for anyone who is interested in things that are morbidly fascinating.  It took me longer than I expected to get through it, but only because school + two jobs leaves me precious little time for leisure reading most of the time.  People with less time-consuming schedules could probably get through it in a night or two.  And let's be even more real:  I'm neurotic and get so in the mood with stuff like this that I manage to creep myself out very easily.  I usually do most of my leisure reading at night, before bed, and I will admit that there were nights where I ended up lowering my blinds all the way before shutting off the light, because even though it's totally irrational, somehow that made me feel better that if any psychos were wandering around my house, at least they wouldn't be able to peek in and creep on me.  But then I remembered the chapters involving familicide, and promptly got out of bed to lock my bedroom door.  Also totally irrational, but hey.

Another thing I had a tendency to do whilst reading Psycho USA (and another reason this took so much longer than expected to finish) was I'd open up the internet and end up doing searches for the people mentioned in this book, especially the ones brought up in passing but who did not have a chapter dedicated to them.  Like Albert Fish, the cannibal pedophile.  That guy was like the epitome of a total sicko.  You know what's also kind of sick, though?  Murderabilia souvenir hunters.  Seriously, that is a thing.  I was not aware of that before reading this book, but apparently, before the days of securing a crime scene, people would hear about a horrible murder and just go flocking to the place like unicorns were handing out free kittens with sacks full of money and lollipops or something.  Like, people would just show up and trample all over the place until they found something with blood on it or hair samples or something that they could take home as a keepsake.  Fucking twisted.

There were some technical aspects about the format of the book that I didn't care for, like the way the photo captions were in the same font size as the main text, which was a little confusing until I realized I was looking at a caption, and not misplaced text.  That is my only real complaint, though.  I wouldn't cite this book in an academic paper, but I don't think Psycho USA was ever meant to be that kind of non-fiction.  It was a very interesting read - I'm a fan of any book that prompts further research on my part, so Schechter wins points for that (he also gets points for looking like he could be related to Richard Gere, but that is not really relevant to anything).  Overall, I rather enjoyed this book, and I'd recommend it.  However, and this is probably obvious because of the subject matter, but a lot of the descriptions in this book are pretty detailed, especially those that are in the killers' own words, so if that sort of thing tends to bother you...this might not be the book for you.