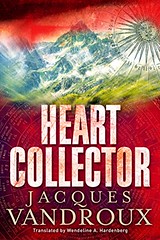 Heart Collector, originally published as Au Cœur du Solstice, is a crime thriller by French author Jacques Vandroux (translated by Wendeline Hardenberg).  I wish the translation hadn't completely altered the title, because the original title makes much more sense.  That is neither here nor there, though, and any other slight awkwardness in the writing that could be a product of translation didn't detract from the story, to me.

In Heart Collector, we follow police captain Nadia Barka as she investigates a series of abductions (and subsequent murders) of young women in Grenoble, a city nestled at the foot of the French Alps.  Assisting in the investigation is Julien, a computer technician who, for some reason, is having visions of the victims just hours prior to their deaths.  Despite knowing how crazy it will make him seem, Julien brings his information to the police, where he is obviously met with skepticism.

Capt. Barka feels she has nothing to lose from following Julien's tips, however, as there are few enough viable leads for this case, and some of the details of the murders bring to mind a case from her past that still haunts her - the murder of another young woman who had been seemingly tortured extensively before being killed.  Not to mention the fact that these particular murders are especially gruesome - the victims' hearts are nowhere to be found, having been expertly removed.  It becomes a race against time when Julien has a vision of yet another woman:  will he and the police reach her before her heart is removed as well?

I got this book through Amazon's Kindle First program, and I'm really glad I selected it as my free ebook for that month.  When I read the premise, I wasn't sure what to expect, since this seems to be marketed more as mystery/suspense/crime fiction rather than as, like...urban fantasy or something, so it was anyone's guess whether the 6th sense element would end up being too corny, or if it would even work within the context of this story at all.


I have to say, I was not disappointed in the slightest.  Despite the more paranormal aspects of the story, the characters themselves even treat it with a healthy dose of skepticism, but for the most part, they still keep their minds open about it, what with the situation at hand being quite literally a life-or-death matter.  I really appreciate that kind of slightly more realistic attitude in fictional characters, instead of just going with the flow, no questions asked, like their lives are some kind of extended improv skit.

Speaking of the characters, Vandroux did a good job developing individuals who are more than just one-dimensional tropes; I feel like this genre can lend itself to an author falling into the stereotyping trap with their characters, but Heart Collector manages to avoid this:  our cop protagonist is not some tragic anti-hero, and the antagonists have some depth as well, with regard to motive for their actions.  I suppose Julien could really be considered a co-protagonist, since the point of view of the story really switches between him, Captain Barka, and the killer, and I didn't find him insufferable at all, although I started out thinking he was some kind of trilby-wearing Nice Guy with a White Knight complex.  He turned out a bit more likeable, even if he is pretty fucking basic apart from having visions of the murder victims.  Sophie comes extremely close to Mary Sue territory, but not to the point where I actively rooted against her just to see her taken down a peg; she was just kind of moderately annoying.

There weren't many twists in Heart Collector, but there were enough to help keep the suspense and momentum going; there was one towards the end that I particularly didn't see coming, and I regretted when I needed to put it down.  Like if I'd been at liberty to, I would probably have read this straight through.  I also appreciate that while there were little glimpses of romance budding between some characters, it didn't become a focus or take over the plot in any way; if I wanted to read that kind of shit, I'd pick up a romance novel, but I don't want it thrown into my other books unnecessarily.  Anyway, I would definitely recommend Heart Collector to fans of this genre, and I'll be looking for more of Vandroux's books in future.

Publisher:
Amazon Publishing, via AmazonCrossing translation
Posted by Colleen at 17:24