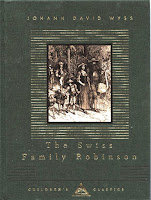 Welcome back! I have for you tonight another children's classic, The Swiss Family Robinson, by Swiss pastor Johann David Wyss.

I actually don't remember ever reading this book as a child, though I think I may have had it in its Great Illustrated Classics edition back then. What I do remember is watching the live-action movie that Disney made in the '60s. Anyway, so I decided I'd give it a read. All I can say is, if I had any memory of reading it as a child, I might have a better opinion of it as an adult. Nostalgia sometimes biases me that way. As it is, however, I was left a little disappointed.

The story itself is fun and charming. It's about a family who, while traveling overseas, becomes shipwrecked and consequently stranded on an island near New Guinea - they are the only human survivors. They end up spending years on the island, managing not only to survive, but to thrive. Their lifestyle I remember envying as a child, watching the Disney film adaptation, and I was jealous all over again, reading the book as an adult. There is something very appealing to me about living off the beaten path, in a treehouse, and living off the land and your own hard work. What I loved about this idea as a child was purely the adventure of it. I think that as an adult, part of the appeal is that these people are clearly not sitting around, worried about whether or not they have enough money to pay the bills this month. Granted, if this story were played out in real life, I am certain that at least one of these people would have died, especially considering all the misadventures and potential misadventures that they run into, but since this is a children's book that was written by a pastor, I can look past the inaccuracy.

So I guess at this point, you may be wondering what it is about the book that I didn't like. There were three major things that bugged me throughout the entire story: first, that from the very start all the way through the end of the book, the father (who is also the narrator) is apparently completely knowledgeable about everything. He knows precisely what to do in any possible situation; he knows how to make everything they end up needing, be it tools, bread, or their entire house; he can even identify all the animals on the island. It's all just much too convenient.

The second thing that bothered me was the animals themselves. The island on which they are stranded is described as being "near New Guinea." I question whether some of these animals are even native to that area. I almost wonder if Wyss didn't just pick some animals he thought were exotic, and threw them into the story without really having any idea whether or not these animals would even be co-existing in the first place.

The third major thing that irks me about Swiss Family Robinson is the children. It seems in the Robinson family, being conveniently knowledgeable is an inherited trait, because all of the children are incredibly useful. Maybe this is partly a reflection of the time (this book was originally published in 1812) and perhaps also of culture, but I don't know any young children who would be anywhere near as useful and knowledgeable as the younger children in this story. They help find necessities on the shipwreck; they help build the house; they make spoons from raw materials on the beach. All without being asked/nagged/forced. Seriously, the whole family is too good to be true.

Having seen the film before reading the book, I was of course surprised at things Disney altered in the story. Mainly, the opposing force in the movie is a band of pirates. In the book, the family is sharing the island with a group of natives. Maybe it's the anthropology student in me, but I think the story arc with the natives is much more interesting than that with the pirates. They didn't come up too frequently, but when they did, I felt like they added a very interesting dynamic, and I would have liked to see more interaction between the natives and the Robinson family.

All in all, I don't think the book is terrible; if I had children, I'd probably read it to them, or give it to them to read on their own. But I probably wouldn't go out of my way to read it again myself.

See what others are saying about it or buy it now:
Amazon
Better World Books