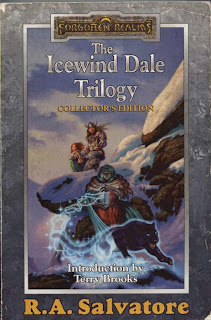 Hello, again, book-lovers! It has been a long time since my last post...you were probably wondering if I'd flaked out on the blog, but I have just been incredibly busy with schoolwork. During the semester, I don't always have much time at all for things that are not my homework assignments! I will try not to let there be more than a couple of weeks between posts, though (on average, it usually takes me one or two weeks to read one book, but depending on my schedule and amount of schoolwork, that can vary, so please bear with me).

This evening I am posting for you about The Icewind Dale Trilogy by R.A. Salvatore. Normally, I would not be posting a trilogy as a joint review, but since I started this particular trilogy long before I decided to start a blog, I do not want to mistake any events in one book as happening in another, etc. Also, I just finished the final in the trilogy, so I want my reflections to be fresh. The trilogy consists of (in this order) The Crystal Shard, Streams of Silver, and The Halfling's Gem.

Yes, The Icewind Dale Trilogy is from the fantasy genre, and yes it is Dungeons & Dragons (Forgotten Realms is only one world of multiple in the D&D 'universe'). If those facts would be the only things keeping youfrom reading the books, I would definitely urge you to reconsider. First of all, if you would just be too embarrassed to be seen reading a Dungeons & Dragons book, you have nothing to worry about, since nowhere on the cover of any copy I have seen (and most definitely not those which are more recently published) do they say "Dungeons & Dragons". Secondly, the books are amazing!

Salvatore has managed to create dynamic characters that I fell completely in love with almost feeling, either way). With the exception of one (Wulfgar the barbarian calls to mind others of his type, such as Conan), they are fairly unique, and each of them only gets more well developed as the story goes on. This is especially true in the case of the dark elf Drizzt, who turns out to be what most would consider the main character. From the start, you are witness to internal reflection on a level that most novels do not allow, but in a way that does not diminish the action of the story.
immediately upon meeting them (and even those who I did not fall immediately in love with, I immediately hated. A strong

As is to be expected from any novel in the fantasy genre, there are quests and there is almost non-stop fighting, and the same basic races of people are present --- humans, dwarves, elves. However, what I really like about the races of people and the kinds of creatures in Dungeons & Dragons is that there is much more variation than what is represented in other literature. Such variety makes the world of the story more realistic to me, and I can get more into it that way. And a further note on the fighting: if these books were adapted into screenplays, the action would be well on par with such box-office favourites as The Lord of the Rings trilogy, though if kept completely true to the novel, perhaps not so family-friendly. The characters are warriors and survivors --- they go for the kill, and Salvatore is not shy about detailing precisely how.

This particular trilogy, from what I understand, was the first in this "series" to be written, and sort of lays out the coming together of the central characters as a group. It is, however, considered to be books 4-6 of Salvatore's Forgotten Realms series focused on these characters, and while it may sound like they are nothing but back-story, this is not the case at all.

The basic synopsis of each of the Icewind Dale books would be as follows: In The Crystal Shard, a power-hungry wizard has gained control of a crystal containing deep magic. War breaks out between his army of various monstrous creatures and the people of Ten-Towns, a community of people settled around the many lakes in Icewind Dale. The conflict makes friends out of former enemies, but we start to see that some prejudices in the Realms run too deep for most to let go.

In Streams of Silver, the dwarf, Bruenor (with the aid of his friends) embarks on the quest that has been his life's dream --- to find and reclaim his ancestral home. Of course, many obstacles exist along the way, including one that leads to the final book in the trilogy, The Halfling's Gem. In this book, the party journeys even farther, leaving certain business unfinished in pursuit of a friend whose past has finally caught up to him, at the risk of all their lives.

I look very forward to reading more of these characters, of Forgotten Realms, and of Salvatore's work beyond Dungeons & Dragons. And again, if the only thing really holding you back from giving these kinds of books a read is the unnecessary stigma against D&D, I hope you will not continue to let it bias you, because the stories and characters are truly engaging. I see no reason you should be disappointed.

Series Info: What came before this book? What's next?
The Icewind Dale Trilogy
* The Crystal Shard (Book 1)
* Streams of Silver (Book 2)
* The Halfling's Gem (Book 3)