Go the Fuck to Sleep 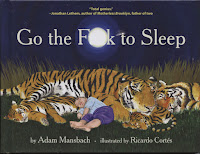 Go the Fuck to Sleep by Adam Mansbach is an adult parody of children's bedtime stories. It is written in verse, and there are illustrations that, while sometimes sweet, I also think are borderline creepy. Which kind of works.

I'm not a parent, but I have had a lot of experience with young children, and while I did not use the word "fuck" back in the days when I used to babysit, the sentiment of "go the fuck to sleep already" was definitely sometimes there, so I think I can safely say that anyone who has had the frustration of trying to get a child to stay in bed and go to sleep will appreciate the humor in this book.

It probably goes without saying, though, that if you are opposed to swear words, you may appreciate the humor a little less. The word "fuck" may be censored by the clever placement of the moon on the cover, but that is the only place where it is not written out. Including, but not limited to "fuck," there is a total of about 20 swear words (21 if you count "shitty-ass" as two separate words) in the story itself.

Swearing doesn't bother me, and I think the language used just enhances the frustration of trying to get kids to finally sleep, so I find this book to be hilarious and extremely fun to read.

See what others are saying about it or buy it now:
Amazon
Better World Books