The Wonderful Wizard of Oz

L. Frank Baum's The Wonderful Wizard of Oz (sometimes published with the shorter title The Wizard of Oz) is regarded as the first American fairy tale, and it is one of those stories that every American child would be familiar with, even if they haven't read the book themselves.  This is a story of self discovery:  young Dorothy lives on a farm in Kansas with her Aunt Em and Uncle Henry; one day, a cyclone comes and picks up their house, with Dorothy and her dog Toto inside (she didn't make it into the storm cellar with her aunt and uncle).  Fortunately, she isn't hurt - rather, she gets bored or something after a while, goes to her bed, and falls asleep.  She wakes up when the house is set down none too gently in a strange and very colorful land full of strange little people.

The Good Witch of the North informs Dorothy that she is in the land of the Munchkins, and points out that Dorothy's house has landed on the Wicked Witch of the East, killing her.  Dorothy wants to get back to Kansas, and since with the death of the witch comes the munchkins' freedom, they are more than happy to help her.  They set her up with some provisions and the Witch of the North kisses Dorothy, leaving a mark of protection, then points her in the direction of the Land of Oz.  Dorothy decides her practical and worn-in boots are no good for a long journey on foot, and since the Witch of the East is dead and so will not be walking anywhere anytime soon, Dorothy loots the witch's pretty silver and (unbeknownst to her at the time) magic shoes.

As she travels along the yellow brick road, Dorothy makes a few friends who each desire something for themselves, and Dorothy assures each one that there is no reason this wizard of Oz shouldn't be able to give them what they want, even though she only just heard of the guy and knows nothing about this place.  She's very young, though, so I guess she can't really be blamed for making promises of other people.  The party gets into all kinds of trouble along the way, but miraculously, they make it through every danger completely unscathed.  Eventually, they reach the Emerald City and meet with the wizard, who says sure, he'll grant them each their respective wishes, but only if they go and kill the Wicked Witch of the West first.  She's the last wicked witch left, after all, and since Dorothy downed the other one, this one should be no problem, right?

Most people are probably more familiar with the classic 1939 musical film adaptation of Baum's book, rather than with the book itself, which means anyone who reads this after only having seen Judy Garland traipsing through Oz will be very surprised at how different the two are.  And when I say "different," I mean that the movie is next to nothing like the book.  At all.  So if you have never actually read The Wonderful Wizard of Oz, you are not aware of probably 99% of what actually happens in the original story.  Which means probably you should read it, and soon.  I hadn't read any of the Oz books since I was a kid, so I had pretty much forgotten how basically everything was left out of the movie, and it was like reading it for the first time all over again.

Reading this as an adult, I rolled my eyes and had a lot of "yeah, right" moments throughout this book, just because I am incredulous that Dorothy and her new friends make it through everything with what seems like the greatest of ease.  Also, it seems like every single time something is killed, it is done by decapitating whatever-it-is.  A lot of heads roll here.  If you're familiar with the original versions of European fairy tales, though, any amount of morbidity should not surprise you, since that is pretty par for the course with the genre.

Some things I can sort of see why they were left out of the movie, but there were certainly other moments I would have liked to see, and maybe one day a proper film adaptation will be made that is true to the book.  I for one would like to see Tim Burton make this happen, so that it would have the appropriate levels of WTF and creepiness.

Even though I was very skeptical of the way so many of the adventures played out, I did enjoy my reread of this story, and I'll enjoy reading through the rest of the series eventually, both the books Baum himself wrote as well as those written by other authors.  Some I have read before as a child, and others I haven't read before at all.  This is a great book to share with your children, if you have any, especially if you'd like to introduce them to fantasy literature - The Wonderful Wizard of Oz has many of the elements which characterize that genre, after all.  Nothing in it is particularly epic, I'll admit, but what it lacks in detailed battles and unpronounceable names it makes up for in charm and whimsy, and those are probably more important (and appropriate) for a child's story anyway.

The illustrations in the edition I have are very sweet, even though some of the characters ( *coughDorothycough*) are kind of borderline creepy.  Also, if you need glasses to read, maybe you should find a different edition of this book, because for some reason, on many of the pages, the illustrations are full-page, and the text overlaps.  Which would be fine if the ink weren't in darker colors, making it somewhat difficult to read: 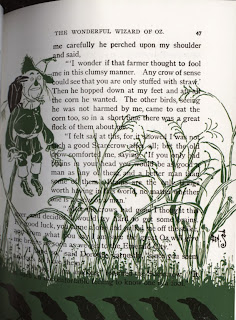 As far as the characters go, the Scarecrow was my childhood favorite (from the book as well as the movie), and he is still my favorite now.  The Lion always annoyed the hell out of me in the movie, but I like him much better in the book.  It also bothers me that throughout the book, Dorothy is always eating when they stop to rest, and the Scarecrow is always foraging up some food for her, but does the Lion ever eat?  Does he go off to hunt, and it's just never mentioned?  Curious.  The Tin Woodman is an enigma.  He cries and gets all kinds of upset at things getting hurt or dying, and when the Lion is going to hunt so that he and Dorothy can eat, the Tin Woodman begs him not to.  Later on, though, Tin Woodman up and murders a wildcat when he sees it chasing a field mouse.  I'm thinking he should be the one who asks the wizard for some brains, because WHAT IS HIS LOGIC WITH THIS.

Seriously, the Scarecrow is a total boss.  He is the Samwise Gamgee of The Wonderful Wizard of Oz; while not the principal character, he ends up being the one who actually handles pretty much everything.  Dorothy, much like Frodo, doesn't do much of anything.  She eats and sleeps and not a whole lot else.  At the end, I kind of want to slap her a little, when they are passing through the land of china figurines or whatever, and she rudely tells a princess that she wants to take her home to sit on the mantel, and then shrugs it off when the Lion demolishes a church.  What if there were people in there, Dorothy?  Heartless bitch.  You need to switch wishes with the Tin Woodman.  At least he would be of some use in Kansas, splitting wood for fences or cabins or some shit.  For real, she lives on a turn-of-the-century farm and her aunt and uncle are getting up there in years; how does she have time to just stand around doing nothing, like in the beginning of the book?  Shouldn't she be feeding chickens or making butter or something?

The only thing I really liked better about the movie is that when the wizard presents each of them with the things they asked him for, the self-discovery moral part of the whole story is not really explained so much in the book.  In the book, I got the feeling the wizard was more or less just thinking "well this isn't really a brain/heart/courage, but they don't know that. HA!" and they all just believe that he actually has given them these things.  So the only real lesson I learned from the book is that the wizard is kind of a dick.  In the movie he seems more like kind of a jackass who sort of redeems himself at the end.

But I digress.  If you haven't read The Wonderful Wizard of Oz, you really should; as good as the musical is, there is a lot more going on in the book. 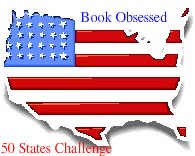