Rescuing the Children: The Story of the Kindertransport 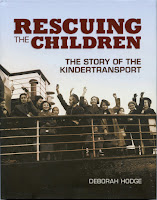 Rescuing the Children:  The Story of the Kindertransport by Deborah Hodge is a non-fiction book about the Kindertransport movement; this was an heroic effort made to evacuate as many Jewish children as possible out of Nazi-controlled Europe just before World War II really started.  This is a part of (pre)-Holocaust history that, sadly, not many people are aware of.  In 1938, nine months before war was declared, things were getting more and more dangerous for European Jews.  Hitler had what seems like almost everyone convinced that the Jews were to blame for their hard times, and these people reacted with hatred and violence.   Many tried to escape as refugees to other countries, fearing the worst for themselves and their families if they stayed any longer in their native countries - but many were refused entry.  The Great Depression gave governments an excuse to bar these people from seeking a safe haven, by being concerned that what precious few jobs they had available would go to these new immigrants rather than to their own citizens.

Kristallnacht, the Night of Broken Glass, was the real catalyst, though, for the birth of the Kindertransport movement.  Mobs of Hitler's followers destroyed Jewish-owned properties, including homes and places of worship.  Jews were killed, and many were arrested and sent to concentration camps.  Jewish parents were faced with what was probably the hardest decision they would ever have to make in their lives:  sending their children thousands of miles away to be taken in by strangers, not knowing when or if they would ever see them again.

Rescuing the Children may be a very short book (not quite 60 pages), but in it, Hodge has provided an absolute wealth of information.  I didn't really know anything about the Kindertransport before reading this, but I feel that I have learned a great deal, and am very interested to continue learning about this event (which will be easy, thanks to the lists of reference recommendations Hodge makes at the end of the book - she includes maps and a timeline as well).  The men and women who organized and ran the Kindertransport were unbelievably brave and tenacious, and thanks to their efforts, thousands of children were relocated to safety before the war really began.  Hodge mentions throughout the book that the children (senior citizens now, of course, those who are still living) often think of their experience as being given a second life; the experience affected them in such a strong and lasting way that even now, reunions are organized for them and for their descendants.  Many of them see the organizers and their chaperones as second mothers or fathers.

Hodge peppers the book with anecdotes about the Kindertransport experience from eight different people who were child refugees through this program.  The decision to include these statements was a smart one, as it really helps the history of the subject come to life, and I always like seeing old photos included in history books like this.  I think a lot of people, children especially, might sometimes have a hard time really thinking of history with the perspective that the people involved were real, living, breathing individuals, just like you and me, and that every major historical event is just one big story that is made up of thousands, sometimes millions, of individual experiences, and we can learn something new and poignant from each and every one.

Although the real message of Rescuing the Children, I feel, is one of hope, I did have a general kind of sadness while reading this, knowing that many, if not most, of these children never saw their families again, and some were even separated from their brothers and sisters who may have gone onto the transports with them.  Some of them were the only members of their entire families to survive the Holocaust.

The brevity of the book along with the overall tone leads me to believe that Rescuing the Children is really meant for roughly middle-grade children (well, that and the fact that Hodge is a children's author), but the content is not watered-down to the point where the message would be lost to older readers.  As an adult, I know I got a lot out of reading this, and although it's not the kind of book I'd use as a source on an academic paper, I would certainly recommend it as an excellent jumping-off point for anyone interested in learning about this topic in particular or about the Holocaust and World War II in general.

Film Adaptations:
Into the Arms of Strangers:  Stories of the Kindertransport

I received this book through the LibraryThing Early Reviewers program; a big thank you to LibraryThing, Deborah Hodge, and Tundra Books!