Filtered Future and Other Dark Tales 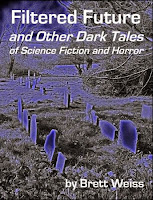 "Filtered Future" and Other Dark Tales of Science Fiction and Horror is a collection of nine short stories, a poem, an article, and an interview by Brett Weiss, whose other published works are mainly non-fiction.  As the title of the book states, the stories range in genre from science fiction to horror, with some  elements of dark fantasy thrown into the mix as well.  Each piece is preceded by a brief introduction by the author, a sort of back-story which provides a little insight into things such as where his mind was when he wrote or conceived of the story, or the story's publication history prior to this anthology.  You won't miss any necessary information by skipping the introductions, but they're interesting to note.

Now, before I go any further, I just want to confess that I had never heard of Bentley Little before reading the table of contents, so I did not read the interview.  Having had no idea who the man was and having not read any of his work, I didn't feel I would really get much out of it, but if you're a fan of his work, I have no doubt that it would interest you.  The article on Stephen King, however, I did read, and it was very interesting.  I haven't read much of any of King's works either (I know, I know...shameful), but I have a couple on my shelves and have every intention of collecting more to read at some point.  I've seen film adaptations of some of his novels, and I admit I feel like they will be books I won't be able to read before bed, since I will likely only be able to sleep after if I take an ambien or a large dose of Nyquil.  But I digress.  On to the short stories.

"Wormboy" is the first, and worms kind of ick me out enough on their own, and while reading this story, I almost felt like worms were crawling on me.  But that is also beside the point.  This story is about an abused boy and obviously, also worms.  I hesitate to say much more than that (or indeed to say much of anything specific about any of the stories), for fear of giving away too much, because I feel that if you read Weiss, you should discover it all on your own.


"Filtered Future" is a vastly interesting story set in a dystopian future of oppressive censorship.  It got pretty intense, and I find myself wishing it were longer, because in the space of just four pages, I wanted more.  I wanted the whole story of this world Weiss created; I only got a passing glimpse, and I wanted more time there.

"What Do They Do While We Sleep?" is another dystopian future that I found myself thoroughly enthralled with and was sad to have end so quickly.  Stories like "Minority Report" and "Equilibrium" come to mind, and I was reminded as well of the concept of chemically-induced "vacations" in Aldous Huxley's "Brave New World," the "soma holiday."

"The Land of Oz" is about the manager of an arcade that he's been a fixture at since his youth; something happens that makes him think about deeper life issues, but he doesn't really take to it very well.  I won't say any more than that, but based on the title of the story, I will say that it may or may not be quite what you're thinking it is.

"Strange Children" started out incredibly depressing, then just kind of slipped abruptly into being incredibly weird and creepy in what I feel is a very Stephen King kind of way.  And since Weiss mentions Bentley Little in the story's introduction, I assume there are shades of him as well.

"The Creation Proclamation" was lighter than the previous stories, but just as off-beat and quirky, and with just as much intellect.

"I Have No TV, and I Must Watch" is, in Weiss's words from its introduction, "a parody of (and homage to) Harlan Ellison's 'I Have No Mouth, and I Must Scream'..."  I had also never heard of Harlan Ellison prior to this book, but after Googling him, it seems he is a notable author of "speculative fiction."  Which is a term I was not aware of before looking up Ellison (clearly, I ended up learning more than just what I got directly from the stories, by reading this book).  Anyway, it's an interesting story of a frighteningly plausible future.

"Washed in the Blood" may or may not be a little predictable as to what the end twist is.  I guessed it pretty quickly, but that in no way took away anything from the rest of the story itself, as Weiss leaves off with an approach not like any I've read before, although I realized after reading that the basic concept of this story, the end themes, may have flitted through my mind once or twice in the past.  I never really gave them any thought, though, beyond "hm. lol." And I'm glad to read a story that treats it a bit more in depth.

"The Lady Loves Dancing" is the final short story in the volume, just before the poem, which is followed by the Stephen King article and finally the interview.  After everything I'd read up until this point, I thought this story had everything end on a note that I thought was surprisingly sweet, and made me think a lot about perspective when I'd finished.

All in all, I kind of wavered back and forth between liking Weiss's stories and not liking them.  After "Wormboy" I was not entirely sure what to expect from the rest of the stories, but I found that there was a good balance of genre and level of grotesque, so I was not disappointed in the least.  If I had to rank the stories in order of which one I liked best to which one I liked the least, it'd be:  What Do They Do While We Sleep?; The Lady Loves Dancing; Filtered Future; Washed in the Blood; Strange Children; The Creation Proclamation; The Land of Oz; I Have No TV, and I Must Watch; and lastly, Wormboy.

I'm sure "Wormboy" has a lot of things going on that other people might get a lot from, but I personally could not get past some of the visuals.  Weiss certainly has a way of painting a verbal picture, and he is very candid about it.  I appreciated this in many ways, but if you are particularly squeamish, I would not recommend that first story.  I also could have done without dicks being mentioned off-hand in almost every story.  I mean, I'm no prude, but penises and lust feature more than I cared for; although, I can see where in at least some of the instances it may have been adding to the story in some way.  In any case, it didn't bother me enough to stop reading.  It was more the kind of thing where you raise an eyebrow and move on.

Weiss's stories, as I mentioned earlier, are very off-beat and quirky, and often rather dark, like a 21st century Edgar Allan Poe.  At some points they're absurd enough that I would say his writing is kind of borderline Bizarro, but if you're paying attention, they also all have some quite strong poignant moments.

I met Mr. Weiss at the Dallas Comic-Con Fan Days, when I bought a few video games and a small stack of Fighting Fantasy gamebooks at his booth, and I very much appreciate his sending me this ebook for review.  It was certainly unlike anything I've read before!

See what others are saying about it, or buy it now:
Amazon