Voice-Over Voice Actor: What It's Like Behind the Mic

Okay, so I was about to start reading something else entirely, but I had ordered Voice-Over Voice Actor, and when UPS brought it, I couldn't resist diving into it right away.  And I'm not one of those people who can read multiple books at once (not counting textbooks for school).  Anyway.  I was not familiar with either Yuri Lowenthal or Tara Platt until I saw them as guests on an episode of Tabletop, a gaming show on the web channel Geek & Sundry (which I highly recommend you check out, if you aren't familiar with the site already).  I became immediately enamored of them both because they are absolutely awesome and adorable, and I sincerely hope they have babies, because if anyone in the world should reproduce, it is them.

But I'm getting a little off topic here.  If you don't know who they are, or haven't clicked over to either of their websites, or haven't figured it out by the title of the book...Lowenthal and Platt are professional voice actors.  Voice actors, obviously, are the people doing the voice-over work in the narration for commercials or movies, they bring life to your favorite animated characters, and the style of voice-over that many of you reading this right now may be very intimately acquainted with, narration of audiobooks.  They get paid to do these things, and eventually may end up making a living off of it.  And I think that sounds like one of the most fun jobs a person could possibly have.

The more technical behind-the-scenes parts of the world of voice-over were kind of a mystery to me, though, and I'm sure they are to a lot of other people.  Probably to most other people.  I mean, I've seen clips of musical artists and radio personalities in sound booths before, either recording or broadcasting live.  But voice actors?  I never used to think so much about who the people were, who were doing all this narration or providing the voices for the cartoons I enjoy watching, but I've been more interested in it lately, and I think these people all deserve way more recognition and general appreciation than they seem to get.  I know in some Asian countries at least, voice actors can have the same kind of celebrity status as screen actors, and that is how I feel it should be.  For real, go compare the IMDb listing of a relatively well-known screen actor to any voice actor, and don't be surprised if you find that the voice actor is more prolific - these people do A LOT.

Voice-Over Voice Actor is a truly fantastic book.  The back cover says it is "the coolest book on voice-over out there" and while I haven't seen or read any others on this topic, the claim seems plausible.  Lowenthal and Platt take the reader pretty much step by step through the process of starting out in voice-over, but they do stress more than once that the way things are laid out in the book is not the only way to go about pursuing this.  What they've done is essentially compiled into book form, very thoughtful answers to questions they have often been asked about voice-acting and voice-over.  But it's not page after page of "well this is what we did, and it worked, so this is what you should do if you also want to be successful."  Like I said, they often make a point of reminding the reader that these are just things that worked for them (or in some cases, things they did which they subsequently learned they should probably do differently in future).  They've also included anecdotes from various other people in the industry, from other voice actors to producers, directors, and sound engineers.  This gives you a much wider perspective, and for me, strengthens the genuine tone of the book overall.

Because that's what this is.  Genuine.  Lowenthal and Platt have given us something not only extremely informative, but it's written conversationally, which makes it something that is also charming and fun to read.  Little comic strips of the authors emphasizing a point are peppered throughout the book, and some tips/suggestions are highlighted as little "Mic Says" blurbs.  And while the chapters are broken down further into smaller sections based on specific topic content, in the back of the book you can find both a glossary of voice-over industry jargon as well as a fairly comprehensive index.  This makes it supremely easy to go back and look up a particular piece of information later on, should you want/need to.

In addition to the informative text, one chapter includes samples of "copy" for the reader to practice with, which I liked because any time before that when they would discuss demo reels, I just kept thinking about how I would have absolutely no clue what kinds of things to say on one (although if you check out the authors' websites, you can listen to their own demo reels and get an idea of what those are like in reality instead of just in theory).  They've also created a sort of companion website to the book.

I would definitely recommend this book to anyone interested in pursuing voice-over professionally and to people who are just generally interested in the field. I will also say, though, that a great many of the tips and suggestions that are offered in this book could reasonably be applied to the pursuit of ANY profession or endeavour, such as marketing yourself and maintaining a certain level of professionalism (even while having fun).  So really, I'd recommend that everyone read this book. 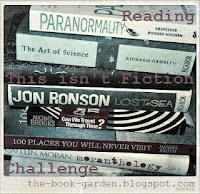