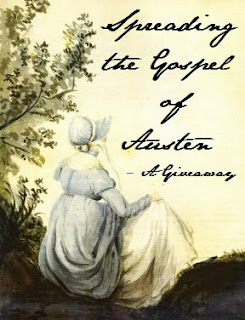 Good morning, all - and a happy belated birthday to our dear friend, Jane!  Yesterday was the anniversary of Jane Austen's birth, and the day when I was going to publicly announce the winners of the giveaway, but I didn't actually get a chance to make the blog post, so here it is today.  Sorry about that!

For the winners of the novels, I tried to pair one more well-known work each with one perhaps lesser-known work, so hopefully you haven't read at least one of them before!  And even if you have, I've found that there's something new to be discovered in each re-read - or maybe you know someone else who hasn't read it yet, and you can further spread the Good Word.  ;-P

So, without further ado, here are the winners, as selected by Rafflecopter: 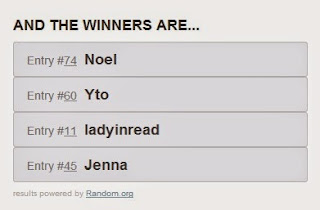 Noel has won the main prize, ladyinread and Jenna (from Fans of Fiction) have won the additional US prizes, and Yto is the international winner.  A big congratulations to all the winners, and a huge thanks to everyone who entered!  I'm really grateful for everyone who participates, because that's what makes the giveaway both possible and successful.

Winners have all been notified by email, and prizes will be sent out as soon as possible - each winner will receive another email once their package has been sent.

Thanks again to all who participated in Spreading the Gospel of Austen!