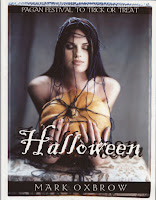 Halloween: Pagan Festival to Trick or Treat is a non-fiction book by Mark Oxbrow, about the history of Halloween. He starts back in the Iron Age with the Celts, then progresses up to the modern day, discussing the holiday's beginnings as a celebration of the new season/new year, the holiday as a celebration of loved ones who have passed on, as the Catholic saints' day, and as our modern notion of a night where people get dressed up and children collect candy.

I finished this book last night, and I have to say, I was kind of glad to be done with it. Not that it was a terrible book, because it wasn't. Not exactly. It was extremely informative, but it wasn't quite what I was expecting. Oxbrow really does take us WAY back, and one goal of his in writing this book was to help dispel some of the myths surrounding the origin of Halloween. I think he presents enough information to convince someone that they've been misinformed of the beginnings of this holiday, but the bulk of the text is mainly quotes and excerpts from the sources he used; there is comparatively little of the author's own narrative. I would have liked to read more about what he had to say, rather than reading his sources and then his opinion on the passage quoted.

The sources themselves were a little bit lacking. I don't mean by this that I think they were inaccurate in any way - they were very interesting. I just feel like many things he cited were completely irrelevant, to the book. Seriously, just because some event occurred on or around Halloween, does not make that event connected in some intrinsic way with the holiday or its origins or how it is celebrated. Some things are just a coincidence.

Another thing that I would have liked to see is more pictures. There is a full-page photo (usually black & white) at the front of each new chapter, and there was a short full-page-photo-interlude of sorts with some color photos, but mostly the only pictures were the miniscule pictures of vintage Halloween cards up in the corner of each page (also not in color). This kind of book just screams to have pictures in it, so I'm not sure why it was decided to have so relatively few in this one.

A major thing that bugs me about this book though, and bugged me from the moment I first picked it up, is the cover. It's so weird! A naked girl covered in string and holding a pumpkin? What does this have to do with the history of Halloween? I thought to myself that surely this must be explained somewhere in the book - but no. Like many of the things discussed in the text, this cover photo is completely irrelevant.

Overall, I'd say if you're looking for a decent reference material on the beginnings of Halloween, this would be a good book to borrow from a friend or from the library, because it does have a lot of interesting things to say. But, if you're looking for a fun, light read about the history of Halloween with descriptions of different traditions and photos of people dressed up, you may want to look elsewhere. Many of the sources quoted here are in Middle or Early Modern English, and though there are also translations provided after the original text, I know this is not the kind of book most people would consider picking up for some fun, light reading.

I'll probably hang onto my copy, since it is pretty good for reference material if I want to check out his sources for any reason in the future; but I doubt if I'd ever read it straight through again.