The Better To Hold You

The Better To Hold You by Alisa Sheckley is the first of Sheckley's books about Abra Barrow.  Abra is a veterinarian living in Manhattan, studying at the Animal Medical Institute, a teaching hospital.  Her husband just got back from spending the summer in Romania, researching the myth of Unwolves for an article he's writing, but Abra notices Hunter has changed since she last saw him.  He didn't write to her much while he was away, and he isn't very forthcoming about what happened to him there, but she understands enough to realize their marriage may be in trouble.  He wants to move into his family's old home in the small town of Northside, and Abra decides to make the move with him, to try and save their marriage.  But she soon finds out that life in this small town is going to be anything but quiet or simple, and when their closest neighbor turns out to be an intriguing stranger who showed up at the Institute one day, she discovers that her situation with her husband is much more complicated than what she ever could have imagined.

This is the first novel about lycanthrophy that I have ever read, and I have to say - I really enjoyed it!  It's essentially a paranormal romance, but there was also more to the story than simply that.  One thing I learned about romance novels featuring werewolves?  They have a LOT of sex.  And I really mean A LOT.  I have heard this is pretty much true across the board with lycanthrope romances - primal instinct, or the call of the wild or some such thing, I guess, but I don't think it was necessarily too much in this novel, since Sheckley adds a lot more elements to the plot than simply the sex.

I really liked Abra.  I am obsessed with names, though, and I really am not a fan of hers.  It didn't bug me quite so much after it was explained in the book, but still.  Weird.  lol.  As for Abra herself, I really liked her - I could see a lot of myself in her, and I like having that kind of relatability in a character.  She has weak moments, and she's not entirely sure of herself, but she's not a total pushover or some kind of co-dependent basketcase, either.  Abra has a balance of qualities in her that make her feel very multidimensional and real to me.  Admittedly, I felt I liked her even before I read the book; the cover shows us a girl wearing a simple camisole and a pair of jeans.  No leather ensemble for this lady!  While a lot of them look really cool, I'm a little tired of so many covers having these tough-looking girls wearing these crazy leather/leather-looking outfits.  I loved the down-to-earth feel I got of the character from the cover model's casual get-up.

Hunter I just really did not like.  At all.  Maybe I'm biased, because I've been burned a lot in past relationships, but I felt extremely sympathetic to Abra.  I don't really have much else to say about Hunter except UGH.  It really bothered the hell out of me that he had so much he clearly needed to talk to Abra about, but he just kept it all to himself until it was too late for talking through it to do any good or change anything.  That touched a raw nerve with me, because I went through something similar very recently, and I still do not understand why some men apparently find it so damn hard to say "X is bothering me, and I'd like to talk about it so that maybe we can figure out a way to fix it."  Or if it turns out it's not something that can be fixed, you can at least figure out what to do from there, instead of just keeping it all bottled up and drawing things out while the other person is full of anxiety and uncertainty from picking up on the tension the entire time.  It's just not fair to either party to blow it off until it blows up.

But I digress!  I went off on kind of a tangent there, sorry.  Anyway, one of the other characters, Red, I am still not sure whether I really like him or not.  I know I'm "supposed" to like him, but I think I partly found it hard to connect with him because Sheckley makes it clear that he's got some kind of Texan accent, but it felt very ambiguous as to where he's supposed to be from.  It sounds as though he is supposed to be from west Texas, so I want to imagine him with sort of a drawl, but Abra refers to him in private as a redneck sometimes, which makes me think more of an East Texas small-town twang.  Though Abra likely doesn't have a lot of contact with different kinds of Southern/Southwestern accents, so maybe she would think they're all kind of rednecky?  I'm not sure exactly.  Maybe whenever I get around to finding and reading the second book, I'll understand more and like him better for it.

One character who was not in much of the story but who I am very interested to know more about was Malachy - he's got this whole mad scientist kind of vibe going on, and Sheckley makes it no secret, so I know there has to be more of a story with him in the next book, too.  Or at least I hope there is.

Can you tell I liked this book?  haha.  I really want to know more about Northside and its under-the-radar inhabitants, and I can't wait to see how things develop from where Sheckley left off at the end of this one.  Even if you're not into smut, I'd recommend picking this up - you wouldn't exactly be missing too many plot points if you skimmed past the Sexy Times bits.

Series Info:  What came before this book?  What's next?
Abra Barrow
* The Better To Hold You (Book 1)
- Moonburn (Book 2) 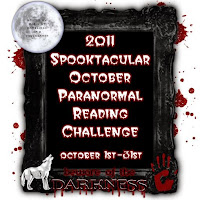 For more information about the challenge, visit Marie at Ramblings of a Daydreamer!