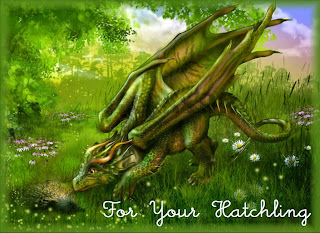 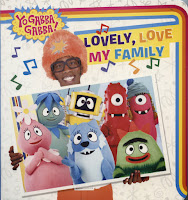 So I'm sure all of you (at least all of you in the US - I'm not sure where else this show airs) who have small children or who are around small children are aware of the television show on Nick Jr, Yo Gabba Gabba! For those of you who are not familiar with it, it's a show with a crazy looking guy and a bunch of crazy looking monster things (and what looks like also a robot), and they teach kids stuff. They also feature contemporary musical acts, which is what I think is really cool and unique about this show - they've featured some of my own favourite groups, and I bet if you look up who all has performed in a guest spot on this show, you'll find some of your favourites as well!

Anyway, my niece (who will be two in April) freakin' LOVES this show. I asked my sister-in-law to describe it for me, and apparently it is really wack-a-doodle (this is a word my phonology professor uses a lot; thought I'd try it out, lol) to watch. Here is part of what she had to say:


But yeah, if you have Netflix and you are curious, this show is on Instant Play. Even if you don't have Netflix, you're probably still curious why I'm even talking about some crazy acid trip of a kids' show. Well, I was at Target earlier today, and saw this book! Knowing how into Yo Gabba Gabba! my niece is, I grabbed it for her for Christmas. It was about $5 US, and the back cover has a little blurb stating that there is an eBook edition also. It's a really short board book (only 12 "pages"), and the pictures are really cute. It has photos of the characters, of course, and the text parts are in coloured boxes, with the bits of song lyrics all in coloured font and larger than the regular text parts. It looks pretty visually appealing for young fans of the show. :)

This book was adapted by Ellie Seiss, and is based on the song "Lovely, Love My Family," as performed on the show by The Roots:

I don't know how many of you have small kids, but if they don't already watch this show, they would probably really enjoy it! And at least the music is potentially less likely to make you insane, compared to a lot of other children's shows. Those of you who do have children, or who work with children, do they like this show? I know that when I worked in childcare, a lot of the kids there loved it as well. I think the book is a good idea, since it allows kids to get their fix while giving Mom/Dad/Whoever a break from the show itself once in a while - because anyone who knows young children knows they can watch the same thing on repeat 24/7 and magically not get sick of it.

Email ThisBlogThis!Share to TwitterShare to FacebookShare to Pinterest
Labels: board books, children's fiction, Ellie Seiss, For Your Hatchling, Nick Jr, The Roots, Yo Gabba Gabba