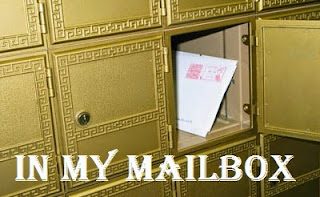 In My Mailbox is a weekly meme hosted by Kristi over at The Story Siren. I was trying to post this meme the same day each week, but it's coming a little late this time, because on Sunday I went to the Half Price Books Warehouse Clearance in Farmers Branch! HUGE thanks to follower Coren for giving me the heads up about this fantastic event! Basically, you walk in the door to the warehouse, and are handed a giant tote bag. The idea is you fill up the tote bag as much as possible, and you get the bag and its contents for $10 total. Need more bags? The deal applies to each bag you fill up. I only did one bag, though! I mostly got a TON of fantasy novels, and most of those are Dungeons & Dragons. There are so many, I'm not going to post them all here, but you will see them eventually! I found individual copies of R.A. Salvatore's Dark Elf Trilogy books, and also an individual copy of The Crystal Shard, so I've swapped out cover images on my reviews for those books.

The non-fantasy books I got were: The Lovely Bones by Alice Sebold; The Choice by Nicholas Sparks; The Second Summer of the Sisterhood by Ann Brashares; The Lake House by James Patterson; The Lost Symbol by Dan Brown and Cold Mountain by Charles Frazier.


I also attended another bookish event the weekend before last: The 2011 Annual General Meeting of the Jane Austen Society of North America! It was held here in Fort Worth; the bulk of the conference was during the week, so I wasn't able to attend any of the breakout sessions (classes and work), but I did get to browse the vendors and get some books signed when I was there to help set up for brunch on that Sunday. Many people attending the JASNA conferences wear Regency period dress, and it was a lot of fun to see! I wish I could have been there to see the ball, but I have had a lot of schoolwork this semester, so the time I had to help out was pretty limited.

I also got a tshirt, a pocket mirror, and some really cute buttons from one of the vendors, Emily from Meryton Marketplace. She was also very generous, and donated some items for a giveaway I will be hosting in the near future - the main feature of which will be Jane Austen for Dummies, which I had signed by the author, Dr. Joan Klingel Ray. I have a copy of my own that I'd had signed quite a while back, and it's an excellent resource for Janeites and Jane Austen newbies alike! Keep an eye out for the giveaway post and for a review of the main attraction.

I also received some actual mail in my mailbox! I received another RAK, this time from Amanda at Letters Inside Out. She sent me an ARC of Liesl & Po, which I am really excited about reading, as I've heard so many wonderful things about it! Thank you, thank you, thank you, Amanda!

And, I got the last two books from my Amazon order: Exodus by Julie Bertagna and Runemarks by Joanne Harris! Annnnd my ARC of Tempest by Julie Cross came in the mail, too! I've had a great couple of weeks for books! What about you?

Email ThisBlogThis!Share to TwitterShare to FacebookShare to Pinterest
Labels: In My Mailbox, meme, RAK